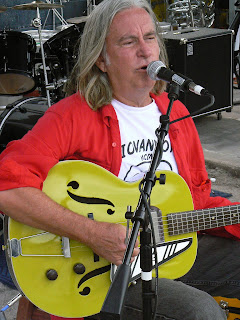 Yeah, I remember when we got word that Berry Oakley had died. It was a year after Duane had been killed. Both on their bikes in Macon. Berry had worshipped Duane Allman. I had been working to get Berry a solo deal as a singer/songwriter when he called me and told me to hold off. They had started a band and he was really excited about it.

I didn't know Gregg or Duane then. I knew who they were. Tough guys from Daytona. My pal, Warren Novak, had traded Gregg a Dual Showman for a purple Triumph that he had come by to take me for a ride on. He was sure that they were onto something. They had just started the Allman Joys at that time.

I had met Berry when he moved to Florida to play bass for the Roemans. He was a skinny, sweet, shy kid. We weren't close but he was a good friend. I didn't see him for awhile. One night in Bradenton as we were packing up our gear after a Noah's Ark show a chubby, shaggy hippie came up, looked in my face and smiled. Psychedelic eyes sparkled through wire rimmed glasses and he said, "You don't recognize me, do you?"

I booked the Allmans to open a show for Cat Mother And The All Night Newsboys at the Electric Zoo in Pinellas Park soon after that. It was their first "real" show or, at least, one of them. They had played in the park in Atlanta and in Jacksonville but no official shows. I was promoting concerts for my record producer, Phil Gernhard, and I put the guys on the bill as a favor to Berry. I was playing with the Outlaws at the time and we played, too. Fine show. The ABB were so astonishing that Cat Mother discussed not even going on to follow them. Gregg took me out under a big oak on the side of the building and played me cassettes of the beginnings of the first LP. I worked lots of bills with them over the next few years, with Duckbutter, but I never saw them with as much fire and drive as that first night.

At the end Berry was looking to help find us a deal for Duckbutter. We had released one lame single on Paramount and we all knew that we had more. Berry was interested in producing us. He was doing better in dealing with problems that almost did him in after losing Duane. He had set up a little showcase for us in Macon. I had called to tell him that we weren't properly put back together to play it. He told me not to worry, that they had a little group with wives and roadies, and that they would fill the date. That's what he was doing in Macon.


Posted by ronnyelliott at 1:50 PM