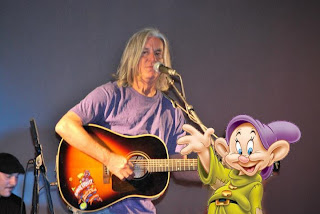 Hey, I'm a musician. Seems like I should have some kind of strong opinion about drugs. I don't. Oh, I hate the waste. Specifically the waste of life, health and money that we have come to associate with addiction and self medication. It's hard for me to distinguish between the same waste from alcohol abuse in our culture. I believe all of those arguments about the legality of alcohol being based on taxes and profits for giant corporations and the government. They always told us that moonshine was illegal because it would kill you after those hillbillies ran that corn mash through dirty copper radiators. When yuppies decided that they wanted to swill 'shine that was flavored with cherries at frat parties it was suddenly fine.

Marijuana is a weed, fercrissakes! It's hard to stop it from growing once it gets started. Two groups align oddly to oppose legalization. Drug dealers who make a fortune selling the stuff and the government who can't figure out a way to tax the stuff.

Wouldn't it be nice if none of us needed to numb ourselves from the pains and tribulations of life. Yeah, well I once took a class in school, Idea Of Utopia. Now, I just try not to judge.

Meanwhile we have prisons chockfull of young men for minor drug possession charges. Big profits, once again, as we move further towards privatization of all social services.

Love everybody you come around. It's contagious. If, at some point, we don't need dope or booze we won't have to worry about any of this stuff. See? All you need is love.