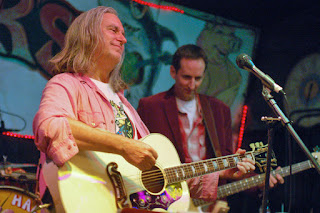 With apologies to Marlon Brando and Elia Kazan, I was, I suppose, never a contender. I could never have been somebody. I've always known to zig when it's been time to zag. Don't get me wrong. I'm not whining. My life is blessed and I've seen things that still thrill me.

He probably blames me for making him an obscure, has been cult figure. A born clown, well-studied magician, self-taught singer. In the late '60's, early '70's Harry honed his skills as a professional fool as the frontman for Duckbutter, our bad intentioned hillbilly jazz ensemble.

His dance, the Mullet, had always been fun. We had entertained drunks everywhere with it. Later Gary Dobbins and I wrote a song just to use for the dance using Harry's four steps:

Now, one thing about Harry; he's not prolific. By the time that we threw together Loco Siempre at some point in the '80's or '90's he was still working the Mullet. I've gotta say that an old white man in a sheer harem girl outfit singing and dancing his heart out while instructing a barroom full of delirious yahoos the Mullet is better than seeing any of the seven wonders that I may have missed.


Posted by ronnyelliott at 1:12 PM