Bad Asses, Every One 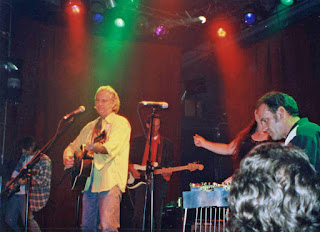 There's no such thing as "The Nationals." When I started my first Ronny Elliott cd, my pals from the Leonard Croon Band were planning to play on the recordings. I was recording it at home. The dining room was the control room and the living room the studio. We were using a borrowed eight track. One track was busted so it really was a borrowed seven track, I suppose.

Steve Connelly was the producer/engineer. He had never done either one. See, I had been hired on to produce a Steve Connelly cd and it was never completed. How we came to work together is another story. Remind me to tell you that one.

Any way, most of the guys from Leonard Croon failed to show up at the house for the sessions. They had decided that they would be "The Nationals" as a joke. We all thought that the name was so bad that we took a shine to it.

I relied on friends like Natty and Harry to play when the tape rolled. On that first record, Ronny Elliott And The Nationals, I remember Mark Warren, Philip Booth, David Lane and a bunch of other friends who happened to be around lending a hand. Of course Steve would add a little guitar on some of the sessions.

The band wasn't really "The Nationals." That was just the name of the cd. It was supposed to be funny.

We were pretty lucky and it immediately began to get some airplay all around the country. Some in Europe, too. Funny thing is, no one worked that record to radio. I didn't even know that there were radio promoters working that stuff. The term americana wasn't being used yet. I was just playing what I've always played. In fact, there are songs on that cd that I had written in the '60's and '70's. There were brand new ones, too.

Randy Wynn, the program director at WMNF in Tampa, called and asked if I would play on a bill at the State Theater in St. Pete for the station. They were bringing in Jimmy LaFave for the first time and Peter Case. He asked if I could put together a "crack band" for the show.

Well, I had played bass on another failed project, this one for Walt Bucklin, in the recent past. I called and asked him if he would play bass for the show. I knew that I wanted to work with him but I really didn't know him. He had to borrow a bass. My friend, Harry Hayward, had tried to play drums in bands for years. Decades. In fact, I had taken him off the drum kit and moved him to singer/magician for Duckbutter. He put together a kit from old scrap drums that he found around town. Steve Connelly agreed to play guitar. I added Natty Moss Bond to the ensemble, hoping that she would be the actual singer in the band. That never panned out because she just couldn't learn all the songs in that short period of time. I seem to remember that we had about two weeks to throw this "crack band" together.

Well, the Nationals are still together. I took the quotes off. I guess it's a band now. There have been others and sometimes there still are. Jim McNealon became a real National and died. We miss him. We really miss him. Rebekah Pulley and Rob Pastore play with us often. Harry loves to have a second drummer. Spencer Hinkle and Wally Watson have been the ones filling that role. We've had other guitarists; Mark Warren, Bob Rippy and Johnny G. Lyonn. Pamela Epps has played sax; Roswald Darby, trumpet; Andy Karpay, mandolin; and Drew Farmer has played piano with us.

It always seems to come back to that original "crack band," though. Heck, I've been through a number of wives over the same period. This is from that first show at the State Theater. Jimmy LaFave and Peter Case have become good friends of mine since then. The Nationals? Bad asses, every one. 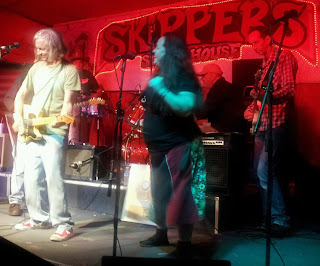 Posted by ronnyelliott at 9:59 AM