Can You See It From Here? 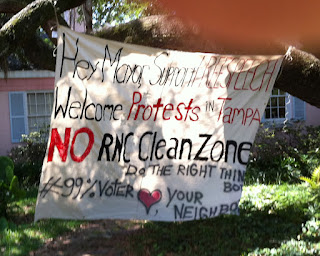 Well, I suppose we all worry about our property values. I happen to live across the street from the mayor. I knocked on the front door and suggested that he and I go to breakfast together as soon as Occupy Tampa got rolling. He said that he was going to Tallahassee but that he would call me in a day or two and we would go. I'm still waiting.
All I hope for is a peaceful RNC in our little town. One where no property is destroyed and no kids with cracked skulls. I can't describe myself as much of a political type. I don't think that Jesus or Buddha or Woody or Will Rogers would want much to do with any of this.
During his campaign I asked a friend what he thought about Bob Buckhorn. "Well, he doesn't have a mean bone in his body," was my friend's response. I voted for him and, to tell the truth, that was one of the major factors. It's true. He doesn't seem to have a mean bone in his body. I can't say that I like statements about "brute force" describing our city's official response to protesters, however. That seems mean and it doesn't seem wise. Let's welcome everyone to Tampa with open arms and let's have a party.
Pray for peace and search for truth.
Posted by ronnyelliott at 1:59 PM