South By So What

I first worked with Doug Sahm at the Clearwater Auditorium for a Star Spectacular in 1966. I don't really remember much about the show but I always loved the Sir Douglas Quintet. I saw him again onstage at the fairgrounds with the Texas Tornados in the early '90's.

At an Americana Music Association gathering a few years later my pal Walt and I were delighted to discover that Doug was our roommate. Of course we hid when he came looking for us so that"us groovers" could go into town that first night where, he explained, the casinos and clubs never closed.

He burned, though. Lit up the room. We had plenty to talk about. Amos'n'Andy, Hank Penny, and, of course, Huey Meaux. He shared his coffee that he made from his special stash that he took in a little kit with him wherever he traveled.

I saw Doug one more time, at South By Southwest where they were presenting him some kind of lifetime achievement award at the Broken Spoke. "Hey, I know you! The Florida boys," he yelled when we walked up.

That had been my first trip to SXSW and my first visit to Austin. I had a fine time. I was a little put off by some of the posturing and some of the posing but I thought that it was a fine little party. I didn't make up the term, South By So What. I took it right out of the newspaper.

I finished up the song when I got home and finished up the record. We decided that it should be the radio single. I thought of the line,"Somebody tell Sir Doug I said hello," as a joke, a throwaway line. We released the record to radio and Doug died the next day. Turned out to be the saddest line I had ever come up with.

Robbie Fulks told me later that the line,"Those jerks from No Depression are an arrogant bunch," was the most singularly suicidal line that he had ever heard. Said that he laughed until iced tea came out his nose when he heard it. I thought that it was just a friendly little poke, too. 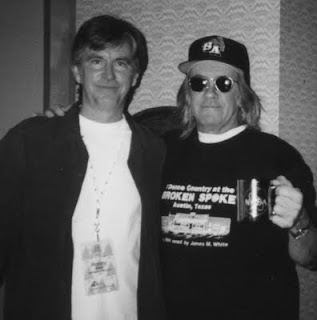 My "career" is fueled on indiscretion. I wouldn't have it any other way.

Posted by ronnyelliott at 1:21 PM