He's On The Keyboard 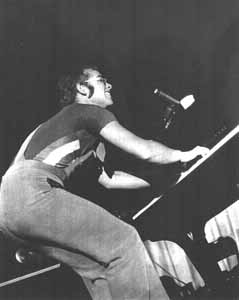 Well, I've had some bad jobs in my life. I scooped mud from the bottom of barges right out of high school. I've played dive bars where the favorite pastime of most of the patrons was to hurt the band. I've swept floors and I've picked watermelons in the rain.

I have to say that the lowest point of employment for me, however, was promoting concerts. It is a dirty, lowdown endeavor that will suck the breath from a decent person. It was built for and by evil scalawags. It attracts the same element of humanity that most "get rich quick" businesses seem to attract. I suppose that politics or evangelical preaching would be today's equivalent.

From the late '60's into the mid- '70's I was stuck in this sewer. My record producer, Phil Gernhard, hated to pay me to sit around between records and projects so he began promoting concerts in and around Tampa to keep me busy. He would make a couple thousand bucks on a show and then we would lose ten thousand on two or three in a row. A lot of money in those days. I'm here to tell you that losing a lot of someone else's money stings more than losing your own.

In 1970 we had a shot to bring Elton John to Tampa. I see that he's coming back to the Sun Dome and I'm hoping that those guys have a better time of it than I did.

His second LP had just come out in the states and he was getting very little airplay. No one knew much about him but he was getting a good deal of attention and starting to receive a bit of critical acclaim. Your Song had just been released to radio so we all thought that he was one of those easy ballad guys who all washed ashore around that time. There was no hint of the showman, influenced by Jerry Lee Lewis and Gorgeous George, that would come later.

There was only one music store in Tampa at that time that dealt in Steinway pianos, Cannon Music at 516 Tampa Street in downtown. We had always rented grand pianos from them when the contract rider called for them. When I called to reserve one for our show at Curtis Hixon I was told that they would no longer rent pianos for shows. After begging and finally pleading the gentleman on the phone explained that Jerry Lee Lewis had recently damaged a perfectly fine baby grand at the fairgrounds in Tampa.

I explained that this British singer-songwriter from England was no Jerry Lee Lewis. I finally wore the kind clerk down to the point where he checked to see what they might have available. After all, we were regular customers. We had recently leased a concert grand for Ray Charles. We were local. Solid.

Finally he determined that there was only one Steinway concert grand in the house and it was brand new. Of course they could not rent it. I finally made a deal where we would pay the difference between the value of the new piano over a second hand model in addition to the rental fee. We had no choice regarding the contract. So far, so good.

Elton John showed up that afternoon wearing corduroy shorts/overalls and a t-shirt. Not so wild for what we would come to expect from Sir Elton over the decades. Funny thing, though, Bernie Taupin was there with him in a matching outfit. Now I'm aware that Bernie is supposed to be straight, and I'm sure that he is, but that seemed odd to me. Still does. I have lots of gay friends but we seldom coordinate our wardrobes.

I always made sure that my fiends in the local press had good access for our shows and the freedom to roam the dressing rooms as well. On this night I had front row seats for my pals, Rick Norcross at the Tampa Times  and Bob Fiallo at the Tampa Tribune. Both frequently shot their own photos. Both were fine photographers.

When the spotlight went on, Elton stormed the stage in a long pants version of the corduroy overalls and began to rock as though his life depended on it. Now, I'm never going to admit to being a big Elton John fan but if this version had lasted for long I surely would have been.

A few songs into the frenzied performance he hopped up onto the top of the new piano and danced his heart out. To say that he destroyed the Steinway would be an understatement.

Rick's photo showed Steinway & Sons in perfect focus. He sold the photo rights to the international company for lots of money as Elton John made a name for himself and climbed to the top of rock'n'roll.

We were stuck with an enormous bill that insured another unsuccessful concert, monetarily, at least. Cannon is out of business. Phil would eventually blow his brains out. Elton John and I still play rock'n'roll.