I know that I've told you the stories of my adventures traveling up to Crystal River as often as I could get someone to drive me in order to spend time with Elvis Presley while he was filming Follow That Dream. On the first couple of trips we would arrive before sunup and have him pretty much to ourselves. He was too sweet and too polite to walk away. He would stay and talk until he was late for the filming.

On the third or fourth trip I convinced my grandmother, Lottie, to come along. She had always loved Elvis. Let's face it, she was southern. She did truly believe that we were all a bit overboard to make a trip for a couple of hours every day just to see him and she told us all the way up there.

As soon as we stepped out of the car, however, the King stepped from the doorway of his cottage at Port Paradise, the resort where he was staying. Grandma left us in the dust and made a beeline for Elvis. She grabbed him in a bear hug and burst into uncontrollable sobs. While she cried her eyes out, Elvis laughed his head off. I don't think either of them had ever enjoyed a moment in life more. 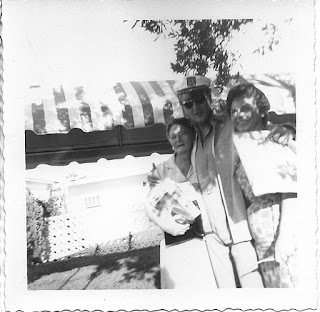 He spent lots of time exchanging stories and posing for pictures. The next trip up she took him a coconut cake that she baked for him. A fresh coconut cake. We had always read that that was his favorite dessert. I read in an interview in a movie magazine months later that a little lady from St. Petersburg had taken him a coconut cake. Close enough.

Grandma made several more of the pilgrimages up with us. One afternoon we sat around outside of the Colonel's bungalow. My grandmother told Elvis about all of the fights that I had been in during grade school standing up for him.

He smiled one of those really exaggerated crooked ones and mumbled,"I'll teach him something to take care of that."

"Karate?" I asked, hoping to sound worldly or at least somewhat sophisticated for a thirteen year old. 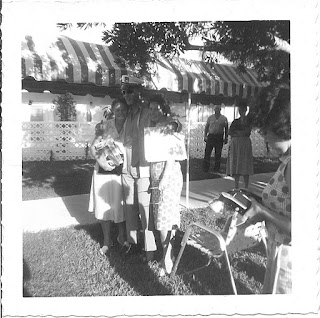 Posted by ronnyelliott at 4:40 PM