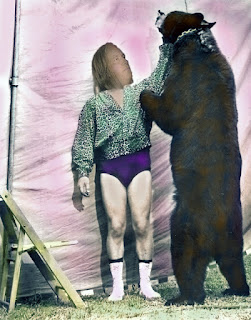 If, for some reason, you want to wrestle a bear today, you're going to have to travel to Russia. That's not really fashionable.
There was a time, not so long ago, that you could grapple ol' Ursus right here in the USA. Cherokee, North Carolina. Walla Walla, Washington. Several little roadside attractions along the northern California highways.
Now, no man can out-wrestle the average bear. Most of these semi-trained creatures were relatively tame, though. The bear would tend to squeeze the human with about the same pressure that he was being squeezed. He would whack the fool about as hard as he was being whacked. They were rewarded for their manners. Usually Coca Cola and Moon Pies. Wo to the drunken hillbilly who decided to show off to his sweetheart. More than one sad bumpkin left the ring with bumps, bruises and contusions. If Bruno concluded that his opponent was playing rough, the match was over.
Don't play where you can't win. Throw balls at the carnival. Win her a teddy bear.
Don't ever step too close to the fire until you're ready to be consumed.

Posted by ronnyelliott at 9:06 AM